Compare prices on car hire in Manchester Airport from all the major brands and find the best deals. When you book through us, unlimited mileage and insurance are always included in the price given. 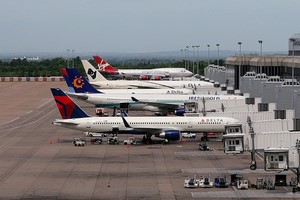 Manchester Airport (MAN) is located 13.9 kilometers outside of Manchester City. From the train station which is located at the airport between Terminals 1 and 2 there are regular trains to Manchester. From the train station can also travel to more than 100 destinations in England .Car hire firm Europcar found at all three terminals at the airport.   Manchester Airport has received several awards such as Travel Weekly Globe Awards’ Best Airport United Kingdom in 2008.

In 2008, Manchester Airport received 21,219,195 passengers. It is the busiest airport in England, if we disregard those in London and in 2007 it was the 22 busiest in the world. It has three interconnected terminals. From Manchester, there are direct flights to several international destinations also outside Europe, especially to the United States . The most popular routes is Palma de Mallorca, Dublin , Alicante , Malaga and Dubai .

Dining and shopping opportunities at Manchester Airport are very good. Other facilities include a bank, a health clinic and a children’s playground that is open 24 hours a day. Radisson SAS Hotel is directly connected to the airport. There are several other hotels at the airport Hilton Manchester Airport Hotel.