Compare prices on car hire in Hämeenlinna from all the major brands and find the best deals. When you book through us, unlimited mileage and insurance are always included in the price given. 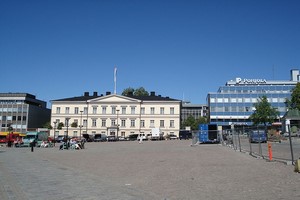 Hämeenlinna is a city with approx. 66,000 inhabitants, situated in the countryside Karla-Häme (Actually League Tavastland). It is the administrative center in Southern Finnish lan. The distance to the capital Helsinki is about. 100 km.

Hämeenlinna has had city status since 1639, and the center was then around Hämeenlinna Castle (Häme Castle). After a major fire in 1831, the center moved and rebuilt – but over the years that have elapsed since then, the city has expanded, so today the palace again connected to the center.

Hämeenlinna Castle, originally built around 1250 by the Swedish Birger Jarl, the city’s main tourist attraction. There is also a museum in the castle. Hämeenlinna is otherwise a monumental historical museum – and a little outside town to visit the Finnish Artillery Museum. Hämeenlinna is otherwise known as the world-famous composer Jean Sibelius’ (1865-1957) hometown – and in his childhood home is now a separate Sibelius Museum.