Compare prices on car hire in Kuopio from all the major brands and find the best deals. When you book through us, unlimited mileage and insurance are always included in the price given. 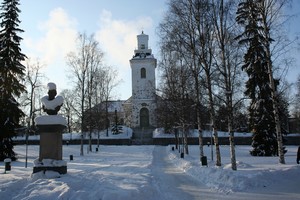 Kuopio, which lies in Northern Savo (east of the central southern Finland ), has 91,959 inhabitants (2008).The city was founded in 1653 – and has a beautiful location on the shores of the Great Lake Kallavesi. Parts of the city lies on some of the lake’s many islands.

Kuopio is known as a culture, which several of the city’s attractions include a proof. Here the Kuopio City Theatre and Dance Theatre Minimi particularly mentioned. There are also a large dance and music festival here every year.

Otherwise, there are a number of different museums in Kuopio. Among these is the photographic museum VB Photography centrum, Kuopio vintage Museum and Kuopio Museum. It is also a museum at the home of the former philosopher and politician Johan Vilhelm Snellman – JV Snellman hemmuseum.   Also another famous statesman is from Kuopio – Finland’s former president and Nobel Peace Prize 2008, Martti Ahtisaari. In addition to this, the Finnish Orthodox Church’s own museum in Kuopio.