Compare prices on car hire in Oulu from all the major brands and find the best deals. When you book through us, unlimited mileage and insurance are always included in the price given. 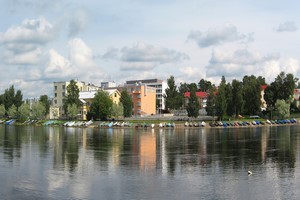 Oulu (Swedish: Uleåborg) is located in the southwestern part of Northern Finland – in the countryside Northern Ostrobothnia, where the river Oulujoki (Oulu River) flows into the Gulf of Bothnia.Oulu is the country’s 6 largest and Northern Finland’s largest city. It was founded in 1605 by the Swedish king Charles IX, and is thus one of Finland’s oldest cities.

There are a number of tourist attractions in Oulu. One of the most visited are the ruins of Oulu linna (Oulu Castle) on Castle Island in Ulejoki (Oulu River) – originally built by the Swedes in 1590, but partially destroyed by a lightning strike in 1793. In the castle tower (originally built in 1875 as astronomical observatorietårn) is the café in the summer.