Compare prices on car hire in Amberg from all the major brands and find the best deals. When you book through us, unlimited mileage and insurance are always included in the price given. 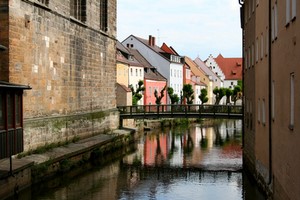 Amberg is located in the southern German state of Bavaria in Germany – specifically in the region of Oberpfalz.The town has approx. 45,000 inhabitants, and is first mentioned in written sources in the year 1034

The ancient center of Amberg is considered to be among the best preserved medieval quarters in Europe. It is surrounded by a ring-wall with several towers – popularly known as A (eggs), the shape.

There are a number of impressive churches and other buildings. Among the most prominent individual attractions is the covered bridge Stadt glasses – which originally was part of the city’s medieval fortification. Otherwise, the Neues Schloss mentioned – a castle that was originally built in the 1400s and renovated in 1603.

Other popular sites in Amberg is Eh’häusl (“The small wedding house”), built in 1728 and today karakteriseert as the world’s smallest hotel (only 2 m wide) – as well as the Franciscan monastery Mariahilfberg, located on a hill near the center.