Compare prices on car hire in Augsburg from all the major brands and find the best deals. When you book through us, unlimited mileage and insurance are always included in the price given. 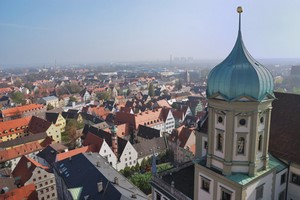 Augsburg, which has approx. 264,000 inhabitants, situated on the river Lech in the southern part of the German state of Bavaria in Germany .It was founded early in the year 15 BCKr. of the emperor Augustus (who also is named after). Later, the city had an important role both in the German-Roman Empire and during the Reformation because it was here that the confessions that formed the basis for the Lutheran church, was signed (the Augsburg confession, 1530).

History has made Augsburg a famous cultural city, and there are still many sites that lure tourists here – including the magnificent town hall from 1615. Also the old poor quarter Fuggerei – established in 1516 as the world’s first social housing – is a popular destination. Here was the composer Wolfgang Amadeus Mozart’s father was born, and “Haus Mozart” is now a museum.

Other much visited attractions in Augsburg is 70 m high tower Perlachturm (with its origin at the 900-number), the abbey St. Ulrich und Afra and the famous marionettetateret Augsburger Puppenkirche.