Compare prices on car hire in Bielefeld from all the major brands and find the best deals. When you book through us, unlimited mileage and insurance are always included in the price given. 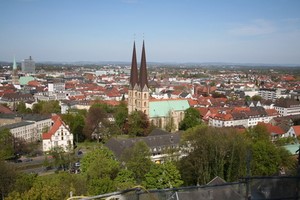 Bielefeld, which has around 325,000 inhabitants, situated in the northwestern part of Germany – in the state of North Rhine-Westphalia.The city was founded early in the 1200s in the vast forest area called the Teutoburg Forest.

Since much of the central town center was destroyed during the 2nd World War II, few preserved historic buildings in Bielefeld. Some great medieval churches are indeed intact – including Nicolaikirche and Mariakirche, both from the 1200s.

Otherwise byborgen Sparrenburg, located just outside the center, Bielefeld’s most famous attraction. It was built ca. 1240, and the lovely park surrounding the castle is also a popular destination.

Bielefeld is known for several special and well attended festivals and markets. Most importantly Sparrenburgfest as with its medieval market is held in July – and in September there is a special wine market in the city. Also, the distinctive linvevermarkedet mentioned. It is held annually in May.