Compare prices on car hire in Bocholt from all the major brands and find the best deals. When you book through us, unlimited mileage and insurance are always included in the price given. 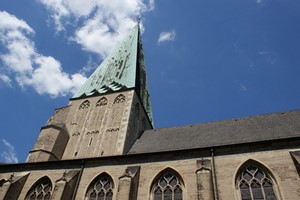 Bocholt is located in the region Borken in the northwestern German state of North Rhine-Westphalia – just 4 km from the Dutch border.The city, which received its town rights in 1222, has approx. 75,000 inhabitants.

Bocholt is primarily known as an industrial city – and until very recent years, the textile industry which has been the city’s economic “engine”. One of the attractions is also Das Textilmuseum Bocholt. There is also a very general crafts museum in the city.

Of architectural interest must especially the late Gothic church St. Agneskapelle and St. Georg-Kirche mentioned (both built in the 1400s). The best-known secular building is the old town hall in the Dutch Renaissance style from 1620’s. It is now replaced by a new, modern town hall – and therefore mostly representative functions, in addition to that it is the most visited tourist attraction in Bocholt historic center.