Compare prices on car hire in Braunschweig from all the major brands and find the best deals. When you book through us, unlimited mileage and insurance are always included in the price given. 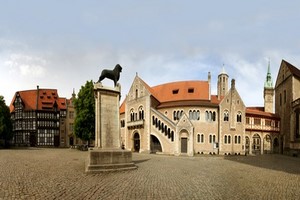 Braunschweig is located in the northern part of central Germany , specifically in northwestern state of Lower Saxony.The city is situated on the river Oker, and has 246,000 inhabitants (2007).

Braunschweig has many sights from the Middle Ages, and in the Old City is Altstadtmarkt (Old Town Square) to the Martini church, erected in the period 1200 to 1400’s. The square is also Altstadthäuser – the Old City Hall, where visitors have access to the 61 meter high tower. From the summit has great views over the city.

Other city sights include Monument Braunschweig-lion, which is the city’s symbol, St. Andrew’s Church from the 1200s, St. Blasii church from the 1100s, Herzog Anton Ulrich Museum – with its art collections from ancient to modern times, and Branschweig Museum – a regional historical museum, which also contains the oldest Jewish museum in the world.