Compare prices on car hire in Bremen from all the major brands and find the best deals. When you book through us, unlimited mileage and insurance are always included in the price given. 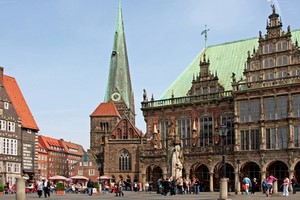 Bremen is a city in northwestern Germany , in the state with the same name – and has 547,000 inhabitants (2007).The city lies on the River Weser – 70 km from the mouth of the North Sea, and is the second most important port (after Hamburg ).Bremen is also an important railway junction.

Old Town with the 6-meter high statue of Roland, and City Hall from 1400-century Bremen’s main tourist attractions, and both are listed as a UNESCO World Heritage Site. This is also the beautiful Bremer Dom – the cathedral from 1000-century, the Cathedral Museum.

Other sights in Bremen are Church of Our Lady from 1000-century, Übersee Museum Bremen – ethnographic museum with extensive collections, Kunsthalle – a collection of European art from the Middle Ages to the present day, including works by Van Gogh, Manet, Monet and Degas,

Neues Museum Weserburg – one of the largest museums in Germany of Modern Art, the Palace Schonebeck which houses a maritime museum and Universum Bremen – an interactive popular science center for the entire family.

Bremen also has countless monuments and statues in the city, as well as several parks and recreation areas.

In addition, good shopping and a vibrant nightlife with restaurants, pubs and night clubs.