Compare prices on car hire in Duisburg from all the major brands and find the best deals. When you book through us, unlimited mileage and insurance are always included in the price given. 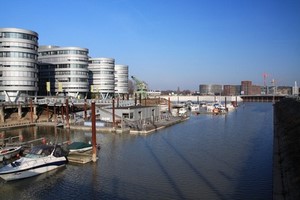 Duisburg (500,000 inhabitants in 2007) located in the western part of Germany – where the rivers Ruhr and Rhine rivers flow together, and belongs to the state of North Rhine-Westphalia.

A historical landmark in Duisburg, the house is “Dreigiebelhaus” from 1536 in the Nun Gasse 8 This is the oldest house in town.

Other sights in the city’s town hall from 1897 (which is on Burgplatz in the center), Salvatorkirche (a large Gothic church from 1415), Culture and urban museum (with among other archaeological finds from the site) – and Wilhelm Lehmbruck Museum, with its large collection of German sculpture of the 1900s. The museum also has a great sculpture park.

Duisburg Zoo is a popular tourist attraction for the whole family – where such can see koalas, dolphins and monkeys.

The town has other great shopping in boutiques and department stores as well as a varied nightlife with pubs, night clubs and casinos.