Compare prices on car hire in Emden from all the major brands and find the best deals. When you book through us, unlimited mileage and insurance are always included in the price given. 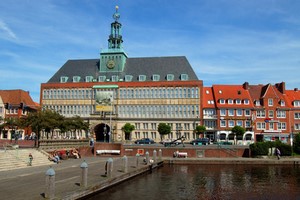 Emden is a city with approx. 52,000 inhabitants, situated where the river Ems has its outlet in the North Sea. Geographical belong to the city region Ostfriesland, in the state of Lower Saxony.

The town can trace its history back to 700’s – and since the late 1800’s, when the Dortmund-Ems Canal was opened, the Emden was the main shipping port for the industrial companies in the Ruhr area. There are few historic buildings to see in Emden, which caused most of the city was destroyed during the 2nd World War II. Reconstruction held on until the end of the 1960s.

Emdens most famous attraction is the large, modern Kunsthalle. Another cultural buildings that attract the interest of many, the concert hall Nordseehallen. Otherwise, the city’s old main church – Die Grosse Kirche – mentioned. It fell victim to the Allied bombing of Germany in the final phase of 2 World War II, but was partially rebuilt.It has not been functioning as a church in the postwar period. Today it houses one of Germany’s largest theological libraries – John-a-Lasco Bibliothek. Also Emdens monumental hall belongs to the sights. It was originally built in 1575 – but was reopened in 1962 after extensive reconstruction / restoration.