Compare prices on car hire in Erfurt from all the major brands and find the best deals. When you book through us, unlimited mileage and insurance are always included in the price given. 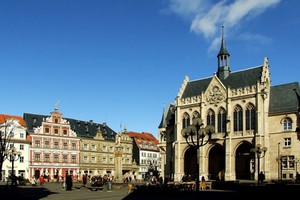 Erfurt, which has approx. 200,000 inhabitants, is the capital of the central German state of Thuringia. The town is situated by the river Gera and is first mentioned in historical records in 742

Erfurt was among the German cities that experienced extensive damage during the 2 World War II. Therefore, the city’s medieval center still intact – and is also the city’s most visited tourist attraction. Among the many interesting historic buildings found here are the two monumental cathedrals Erfurter Dom and St. Severikirche – located side by side.

Another major attraction is the Krämerbrücke – a covered bridge over the river Gera, built in 1325 Otherwise, the old Augustinian mentioned (where Martin Luther studied a few years around 1505), as well as Europe’s oldest preserved Jewish synagogue (built ca. 1100).

Erfurt is also an important museumsby. Among the many interesting attractions here are Stadtmuseum Erfurt (documenting the city’s extensive history), Anger Museum (with medieval art from Thuringia) and the Haus zum Roten Ochsen, which houses the Kunsthalle Erfurt (with changing exhibitions of contemporary art).

Airport Erfurt Airport is about. 6 km west of Erfurt city.