Compare prices on car hire in Ettlingen from all the major brands and find the best deals. When you book through us, unlimited mileage and insurance are always included in the price given. 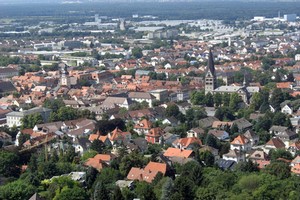 Ettlingen is located in southeastern Germany , in the state of Baden-Württemberg (in the northern Black Forest) – only 13 km from the border with France .River Alb, which is a tributary of the Rhine, flows through the city – which has approx. 39,000 inhabitants.

Ettlingen was an important traffic hub already in Roman times – and is mentioned in historical sources as a city from the 700-number. The old center has steadily its medieval character intact, and the attractions are the remains of the old city walls, and an impressive castle-construction, where the oldest parts are from the 1200s.

Other attractions to the Old Town Hall Tower – also from the 1200s – is mentioned. The town hall, which is also an attraction, is part younger (listed in 1738). A special feature of the old town center are also several fountains, which has stood here since the Middle Ages.