Compare prices on car hire in Fulda from all the major brands and find the best deals. When you book through us, unlimited mileage and insurance are always included in the price given. 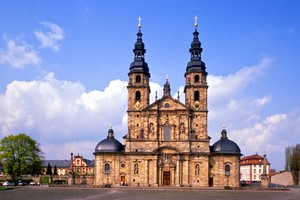 Fulda is located in the central part of Germany, by the river Fulda in the state of Hesse.The town has 64,000 inhabitants (2009), and is an important railway junction. Fulda is located between mountain ranges in the east Rhön and Vogelsberg the west.

The city was founded in 744, but was not incorporated as a city until 1157 The city is now a political and cultural center for the region, and Fulda are often called “baroque city” because an area in the center is home to many buildings from the Baroque period.

A famous landmark in the city of Fulda’s cathedral (also called St. Salvator’s Cathedral) dates from 1752. There is also a cathedral museum.

Other sights in Fulda Fulda’s Castle from 1714 with the castle garden, the Romanesque St. Michael’s Church from the 820-century city hall – originally from 1531, Benedictine Monastery of 744, St. Boniface Statue and Vonderau Museum – a cultural and local history museum exhibition of such paintings, sculptures and artifacts from prehistoric times. Vonderau Museum also has a planetarium.