Compare prices on car hire in Halle from all the major brands and find the best deals. When you book through us, unlimited mileage and insurance are always included in the price given. 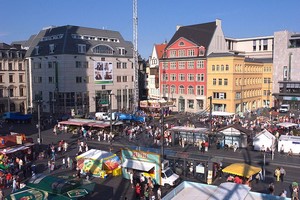 Halle (also called “Halle an der Saale”) located in the western part of Germany , and is the largest city in the state of Saxony-Anhalt.Halle has 233,000 inhabitants (2008), is situated on the river Saale.

Halle is an economic center for the region, and both universities and colleges.The city is also an important railway junction.

Unlike most German cities, Leipzig was little damage during the 2 World War II. The city has several historic buildings which today are popular tourist attractions.

The old city is the cathedral – the oldest church (from 1330’s).Also Moritz Church from 1388 is worth a visit.

Other tourist attractions include Halle “Händelhaus” – the birthplace of the composer Handel (1685-1759) with music museum, Moritzburg – Castle from 1484 with the Art Museum, Beatles Museum – one of the largest in the world, Salt Museum, the castle Giebichenstein from 1000-century, “Roter Turm” – that red tower from 1506 with one of the world’s largest clock tower, and Our Lady’s Church from 1560’s.

In addition, Halle own Planetarium and the “Bergzoo” – zoo, founded in 1901. The city has also many beautiful parks and sculptures.