Compare prices on car hire in Hameln from all the major brands and find the best deals. When you book through us, unlimited mileage and insurance are always included in the price given. 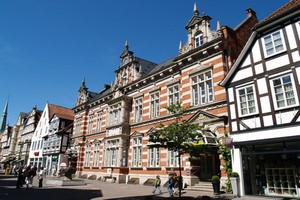 Hameln is located in the northern part of Germany, by the river Weser, in the state of Lower Saxony.The city has about 58,300 inhabitants (2008). The city has a great location between the mountains Weserbergland (west) and Lein Bergland (eastern). The mountains are popular recreation areas for both walkers and cyclists.

Hamelin is best known through the “Rat-catcher of Hameln” – a medieval folk tale which is preserved and read by people all over the world by the brothers Grimm’s interpretation from 1816. Each summer the story dramatized various locations in Hameln – which is a popular tourist attraction.

Hamelin is a historic town with many half-timbered and stone houses from the Renaissance. St. Boniface Cathedral in the Gothic style –   originally from 1000’s – is the city’s oldest church.In the old town you can also visit the charming sidewalk cafes and small, cozy shops.

Other tourist attractions in Hameln is including “Rattenfängerhaus” from 1602 – with an ancient inscription that refers to “rat catcher of Hameln”, “Stiftsherrenhaus” from 1558, “Klütturm” (a 23 meter high observation tower from 1887, located in the mountains cloth) – and the city’s own car museum.In addition, it is popular to take a tour with one of the sightseeing boats on the river Weser.