Compare prices on car hire in Heidenheim from all the major brands and find the best deals. When you book through us, unlimited mileage and insurance are always included in the price given. 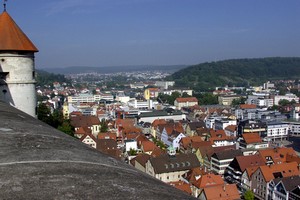 Heidenheim, by the river Brenz, a town in the South German state of Baden-Württemberg in Germany .It has about 49,000 inhabitants (2008), situated at the foot of the mountain Hell Stone – approx. 17 km south of Aalen, and 33 km north of Ulm.

Heidenheim the Municipal Court in 1335, and has several historic tourist attractions.

The biggest tourist attraction in Heidenheim is “Schloss Hell Rock” – the ruins of a castle from the 1500s, situated on a hill above the city with panoramic views. The castle is the city’s landmark and the main building and houses as well as a historical museum. The castle is a nice park, and nearby is an open-air theater.

Other tourist attractions in Heidenheim include Michael’s Church – originally from the 1200s, but rebuilt and expanded several times later, Paul’s Church from 1897 – and the Kunstmuseum Heidenheim – an exhibition of artwork from the 1900s. The museum also has the world’s largest collection of Picasso posters.