Compare prices on car hire in Herne from all the major brands and find the best deals. When you book through us, unlimited mileage and insurance are always included in the price given. 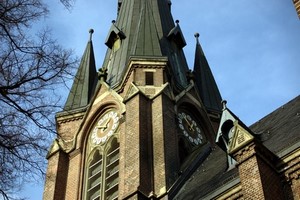 Herne is situated in the western part of Germany – in the state of North Rhine-Westphalia – and has about 170,000 inhabitants (2008).The city is located in the northern Ruhr area, the river Emscher – 15 km west of Dortmund .

Herne was in the middle of the 1800s, an important mining town, and was given city status in 1897. The town has two town hall – both from the beginning in the 1900s. The biggest tourist attraction in Herne is Schloss Strunk from 1500 – and 1600’s, where the historical museum “Emschertalmuseum” lies. In this area, there is also the city’s oldest building – a chapel from 1272

Another point of Herne is the “Westfälische Museum für Archäologie” – one of the most modern archaeological museums in Europe, with an exhibition of Westphalia 250,000 years of history, shown in chronological order.

The city also has its own Opel museum exhibition of old cars, sewing machines, bicycles and souvenirs.

Otherwise, Herne offer theaters, cinemas, parks and recreation areas. “Wananas Fritidsbad” is an attraction for the whole family – with swimming pool and play area for children.

Herne is known for its annual market “Cranzer Kirmes” in the district Crange, which has existed since the 1400s. The event lasts 10 days, and the market has over 4 million visitors each year.