Compare prices on car hire in Kassel from all the major brands and find the best deals. When you book through us, unlimited mileage and insurance are always included in the price given. 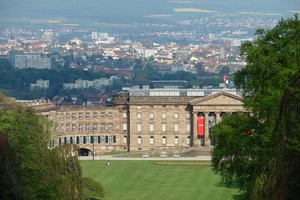 Kassel is situated in the central part of Germany, on the River Fulda, and belongs to the state of Hesse.The city has about 200,000 inhabitants (2008) and is an important cultural center for the entire region.

Kassel is famous for its international art exhibition “Documenta”, held every 5 years. The exhibition focuses on contemporary art, and will be held next time in 2012.

The city has several popular attractions, including Martin’s Church from 1330-century (the city’s largest church), the Fine Arts Friedericianum, Brothers Grimm Museum, the German loss of the museum, Hessisches Landesmuseum – and the Museum of local history exhibition from the Middle Ages to the present day.

Wilhelmshöhe Berg Park is a major tourist attraction in Kassel. This is a large mountain park that also includes “Schloss Wilhelmshöhe” from 1786. The castle (with painting exhibitions of old masters like Rembrandt and Rubens and others) are open to the public. The park also contains the city’s landmark – Hercules statue – which stands on top of the mountain. The statue is made of copper and was completed in 1701.

Otherwise, park Karl Sheep by the River Fulda be worth a visit. The park is from the 1500s and is known for its “Orangerie” – originally from 1710 – the Planetarium and a small botanical garden.