Compare prices on car hire in Leipzig from all the major brands and find the best deals. When you book through us, unlimited mileage and insurance are always included in the price given. 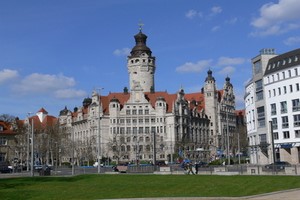 Leipzig is located in the eastern part of Germany, by the river Weisse Elster, and is the largest city in the state of Saxony.The city has 511,000 inhabitants (2008), and is perhaps best known for its large trade fairs. Leipzig is also known as an old university and culture. In addition called Leipzig often for the “green city” – because of its many riverside forests, colonial gardens and parkland.

Leipzig has many tourist attractions, and one of the most famous churches in the city’s Nikolai Church from 1165 Other attractions include the old city hall from 1556, the new town hall from 1899 – with its 114 meters high round tower, Thomas’s Church – originally from the 1100’s, “Gohlisser Schloss” – a beautiful castle from 1756 with the castle garden, the main university building from 1415 – plus Mendelssohn-Haus, home of the famous composer Mendelsson, which is now a museum.

Leipzig also has several other interesting museums, including several art museums, the Egyptian Museum, antique museum, a pharmacy museum and the Bach Museum.

The city is also home to Europe’s largest memory monument – “Leipzig” – which is 91 meters high. The monument was inaugurated 100 years after the “Battle of Leipzig in 1813” – in memory of the fallen.

Otherwise, Leipzig, a great zoo, an attraction for the whole family.