Compare prices on car hire in Mainz from all the major brands and find the best deals. When you book through us, unlimited mileage and insurance are always included in the price given. 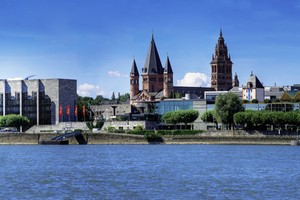 Mainz is located in southwestern Germany – where the rivers Rhine and Main flow together – and is the capital and largest city in the state of Rhineland-Palatinate.The city has about 200,000 inhabitants (2009).

Mainz is a historic town, and already in the year 13 BCKr. was built a Roman fort built here.

Mainz is a university, and is also an important transport hub. The city is also famous for its carnival celebrations.

There are many sights in Mainz – and most attention will NOK Old Town – with a variety of beautiful half-timbered houses from 1500 – 1700’s.There are also several beautiful churches – and narrow alleys with crooked houses and streets with nice restaurants, bars and cafes.

Some of the most visited tourist attractions of the city’s Cathedral St. Martin (originally from 1000’s, but later reconstructed and rebuilt several times), the Catholic St. Stephen’s Church from 1340 (with stained glass windows by Chagall) and the Gutenberg Museum – one of the oldest printing museums in the world.

The city also has a Roman-Germanic Museum, “Zitadelle” (a fortification from 1660), a natural history museum, a botanical garden, the Kunsthalle (with exhibition of contemporary art), and Mainz City Museum – a museum of local history.

Mainz is located on the German highways (Autobahn) A60, A63 and A66