Compare prices on car hire in Nordhausen from all the major brands and find the best deals. When you book through us, unlimited mileage and insurance are always included in the price given. 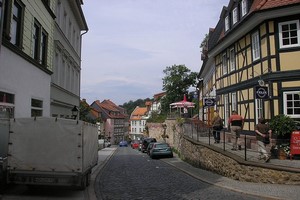 Nordhausen is located in central Germany – the river Zorge – approx. 20 km south of the Hartz mountains.

Nordhausen was previously known for its tobacco industry, but associated today primarily for liquor production.

Some of the most visited tourist attractions of the city’s cathedral “Zum Heiligenstadt Kreuz” – originally a castle that was converted into a convent in 1220, Blasius church from 1234 (restored several times later), Altendorf Church “St. Maria im Tale” – originally a monastic church from 1294, the City Hall from 1610 with Roland statue outside – and the Gothic-timbered house “Finkenburg” from the 1400s.

Bath House “Badhaus Nordhausen” is an attraction for the whole family – with indoor and outdoor pools, spa, solarium, sauna, adventure pool and café.