Compare prices on car hire in Offenbach from all the major brands and find the best deals. When you book through us, unlimited mileage and insurance are always included in the price given. 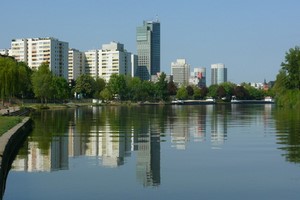 Offenbach (official name: Offenbach am Main) is located in the central German state of Hesse – at the east bank of the river Main, opposite the city of Frankfurt .Although the city has a thousand-year history, it is first and foremost for 2 World War II, it has expanded, primarily by virtue of being an industrial suburb of Frankfurt. Offenbach has approx. 120,000 inhabitants (2008).

Among the city sights are primarily three castles / palaces that attracts attention: Busingen-Palais (the latter half of the 1700s), Butt Mannheim Schloss (1600 – and 1700’s) and ice Schloss (from 1576), which today form the structural core of the design school Hochschule für Gestaltung.

Two of the museums in Offenbach is especially popular destinations. It applies Deutsche Head Museum (documenting the city’s traditional leather) and Kling Track Museum (which is a museum of typography and calligraphy).

A landmark of more recent date is the 120 meter high skyscraper “City Tower”.