Compare prices on car hire in Paderborn from all the major brands and find the best deals. When you book through us, unlimited mileage and insurance are always included in the price given. 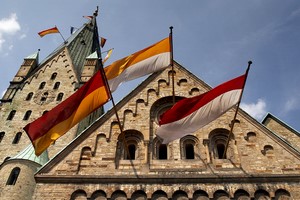 Paderborn is located in western Germany, near the river Pader in the state of North Rhine-Westphalia.The town has approx. 145,000 inhabitants (2008)   – And can trace its history back to Charlemagne’s time at the end of the 700-number.Paderborn has been a university since 1614.

Among the sights of Paderborn, there are several interesting museums – including the world’s largest computer museum, Heinz Nixdorf Museum Forum. Otherwise, the city has an interesting historical center – including the town hall in the Renaissance style of the early 1600’s. Among the buildings that attract attention, is also Residenzschloss Neuhaus from the 1500s.

Paderborn also has several beautiful churches. The foremost is Paderborner Dom from the 1200s, but also the beautiful Marktkirche (1682) is a popular destination. In addition, there are several original monasteries and monastic churches in the city – including Abdinghofkloster from the early 1000’s.

Paderborn has a reputation for being a popular utelivsby, particularly in the area Hafenviertel there are many restaurants, clubs and so-called “Studentenkneipen”.

The airport Paderborn / Lippstadt Airport is 15 miles southwest of downtown.