Compare prices on car hire in Regensburg from all the major brands and find the best deals. When you book through us, unlimited mileage and insurance are always included in the price given. 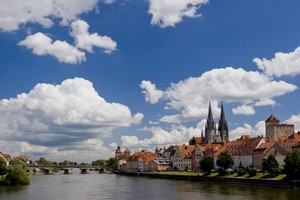 Regensburg is the administrative center of the region Oberpfalz – in the southeastern corner of Germany, specifically where the rivers Danube and Regen meet in the state of Bavaria.There has been a settlement at the site since the Stone Age, and in the year 179 ADKr. the Romans built a large fort here. Today’s Regensburg has more than 130,000 inhabitants (2008).

In 1992, the Rhine-Main-Danube canal was completed to the Regensburg, so the city is now located on a waterway which – in combination with Germany’s major river systems – connects the Black Sea with the North Sea. The inland city of Regensburg is thus also a major port city.

Among the main sights of Regensburg is the city’s many beautiful churches. The Gothic cathedral Regensburger Dom (listed in the last part of the 1200s) is dominant in the townscape. There are also many interesting churches – including Jakobskirche (Schottenkirche St. James), a Romanesque basilica from the early 1100’s. Mention must also ruins of Stiftkirche Obermünster from 1010 Another special attraction is the old stone bridge, which was used already by the medieval Crusaders.

Regensburg has several other major theater companies (among them the great Stadttheater am Bismarck Platz) – as well as a number of museums and other cultural institutions.