Compare prices on car hire in Salzgitter from all the major brands and find the best deals. When you book through us, unlimited mileage and insurance are always included in the price given. 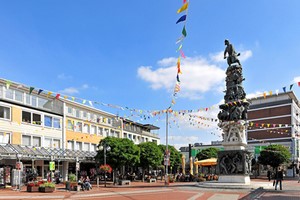 Salzgitter, which has approx. 106,000 inhabitants (2008), located just north of the center of Germany – in the state of Lower Saxony.River Bottom flows through the southern part of the city and connects it with the 325 km long Mittelland Canal, which runs across the country, which in turn is associated with some of Germany’s major rivers and waterways.

Under 2 World War II there were several concentration camps in and around Salzgitter, and much of downtown was destroyed by Allied bombing. Thus, much of the old buildings in the historic center, Altstadt, razed. One of the main attractions is preserved – Renaissance castle Salda (located in the town of the same name), built in 1608.   It was also the city’s main landmark, until the 13.73 meter high sculpture “Turm where Arbeit” was placed in the center of the city in 1995.

Outside the Salzgitter are several historical sites – primarily the imposing Schloss Ringelheim, originally a monastery dating back to 900’s. Castle complex includes also a baroque church from 1694. Otherwise, the medieval castle of Lichtenberg is a popular destination.

Nearest international airport is Hanover-Langenhagen , which is located 55 km west of Salzgitter.