Compare prices on car hire in Schweinfurt from all the major brands and find the best deals. When you book through us, unlimited mileage and insurance are always included in the price given. 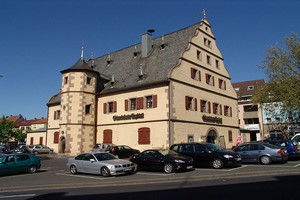 Schweinfurt, which has approx. 55,000 inhabitants (2008), located in the region of Lower Franconia in the state of Bavaria in Germany .The city’s history began in the 700-number, and in the 1200s were built a wall with gates and towers around the city. Parts of this wall is preserved.

Schweinfurt has been affected by war damage several times throughout history – during the last 2 World War II. Yet the city has many historic attractions to show off. Among these is the old town hall in Gothic style (erected 1570-72) is one of the most famous. Mention must also be more   beautiful churches – includingSt. Johannes Kirche (1554-1562) and the Heilig Geist Kirche (1806).

The city has also many interesting museums – including Museum Georg Schäfer, who specializes in the 1800-century art from German speaking countries.

In the center of Schweinfurt, there is a large, pedestrian shopping area – Markthalle – which is very popular among both visitors and residents.