Compare prices on car hire in Solingen from all the major brands and find the best deals. When you book through us, unlimited mileage and insurance are always included in the price given. 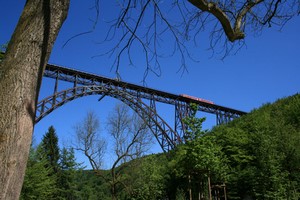 Solingen is located in western Germany – the state of North Rhine-Westphalia, is a city with approx.165,000 inhabitants (2008). It has had city status since the early 1400’s – but the old medieval city was destroyed during Allied bombing in 1944.

Solingen is often called the “Knife City”, because for many years has been known for its manufacture of knives, scissors, razors – and swords.Sword production took it in style here as early as the Middle Ages, and two crossing swords is still evident coat of arms.

Soli Gen’s finest church is St. Clemenskirche – a cathedral with a double tower, built in 1890-92 in the Gothic Revival style, modeled on the famous Cologne Cathedral. Otherwise, the most famous attraction Schloss Burg (originally from the 1100s), located just outside downtown. It is the largest reconstructed medieval castle in Nordhrein-Westphalia.

Among the city’s museums is the Deutsches Museum Klinge the most popular. There is a special museum of swords, knives and steel cutlery of all kinds. The monumental main building is a former convent.