Compare prices on car hire in Stendal from all the major brands and find the best deals. When you book through us, unlimited mileage and insurance are always included in the price given. 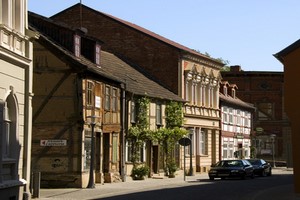 Stendal is a town with approx. 41,500 inhabitants (2008), located in the region of Altmark in the north-east German state of Saxony-Anhalt. The city was founded in the middle in the 1100s – and was then a member of the powerful Hanseatic League.

Stendal is known for its many magnificent buildings from medieval times – including several churches. The foremost among these is St. Nicholas dome (also called Stone Valleys dome) and St. Marienkirche (with a total of 12 bells and a famous astronomical clock) – both from the 1400s. The latter church is located right on the beautiful Rathaus (Town Hall) – also from the 1400s, with a dominant Roland statue in front of the facade.

Among other historic sights in the old downtown, the two old gates Uenglinger Gate and Tangermünde Thu mentioned – both developed with powerful tower of bricks. It is also called the refectory, which represents the remains of an old Franciscan monastery, a popular destination.

One attraction of a different nature is the city zoo – Tiergarten Stendal – which opened in 1934.