Compare prices on car hire in Suhl from all the major brands and find the best deals. When you book through us, unlimited mileage and insurance are always included in the price given. 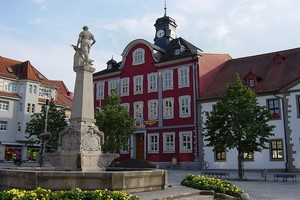 Suhl is located in the state of Thuringia – right in the heart of Germany – and has approx.45,000 inhabitants (2008). The city, which acquired city rights in 1527, was long known primarily for its production of weapons – particularly guns.

One of the attractions are, naturally , a weapons museum. It is housed partly in the historical building Maltzhaus (listed in 1663), partly in a modern building complex. And in the large, modern Congress Center Suhl find an interesting vehicle museum. Here there will also larger theater performances and concerts.

Among the historic buildings have very few of the great churches are mentioned – among others St. Marienkirche (approx. 1490),   Pfarrkirche St. Ulrich (1503) and Gottessackenkirche (1555).One attraction of a different species can be found just outside the city – Biospärereservat Vessertal-Thüringer Wald, which is an example of a special type of conservation area, which is under protection of UNESCO.