Compare prices on car hire in Unna from all the major brands and find the best deals. When you book through us, unlimited mileage and insurance are always included in the price given. 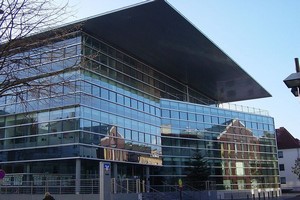 Unna is a town with approx. 70,000 inhabitants (2008), located in western Germany – the state of North Rhine-Westphalia.In the Middle Ages the city had a central location on the so-called Hellweg – the main route between east and west through Germany.

One of the city’s historical attractions is the Burg Unna – originally built in the 1400s, but rebuilt 400 years later. The castle currently houses the City Museum (Hellwegmuseum). Otherwise, the evangelical Stadkirche, where the oldest part is from 1322, cited as another of the sights. There are also a number of well-preserved half-timbered houses, built during the 1500s to the 1800s, in the Altstadt (old city). Along the east side of the Altstadt is also part of the old city wall preserved.

A spectacular attraction of recent date is the Zentrum für Internationale Lichtkunst, which opened in 2001. It is located in an abandoned brewery, and is – as the name says – a museum of light art / lighting design. Central to this system is the light set, 52 feet tall, a former brewery chimney. And 10 meters below ground is the exhibition room, where experiments with light and shadow creates a mysterious, “magical” atmosphere.

The international airport of Dortmund Airport is located just 5.5km west of Unna.