Compare prices on car hire in Wiesbaden from all the major brands and find the best deals. When you book through us, unlimited mileage and insurance are always included in the price given. 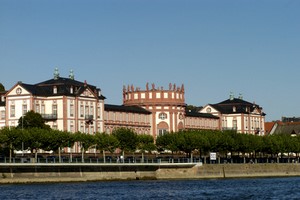 Wiesbaden is a city of around 285,000 inhabitants (2008) and is located in the western part of Germany .The city is the capital of the state of Hesse – in spite of the neighboring city of Frankfurt is considerably larger.Wiesbaden origins can be dated to the year 6 ADKr., When the Romans founded a fortress there.

The city’s medieval city center was destroyed by two large fires in the 1500s. The oldest building, which is still preserved – and that is a main attraction – the Old Town Hall (built in 1610). Otherwise, Schlossplatz a focal point in the inner city. This historically important town square is surrounded by a number of monumental 1,800-century buildings. The most dominant is Marktkirche from the 1850’s (the city’s tallest building, where the spire rises 92 meters above the ground) and Stadtschloss – a palace built around 1840 for Duke Wilhelm I. of Nassau.

There are also several buildings in Wiesbaden that can be linked to the Duke family of Nassau – primarily Erbprinzpalais (1813-1817) in the Wilhelmstrasse and Scloss Biebrich (1702), which is 4.5 miles south of downtown (near the banks of the Rhine).

Page 2 World War II there has been a significant American military presence in Wiesbaden – which has left its mark on the city. Slightly off center, namely the headquarters of the 1st U.S. armored division, and for many years, also the European headquarters for U.S. Air Force (military airport Frankfurt-Erbenheim) has been located here.