Compare prices on car hire in Wittenberg from all the major brands and find the best deals. When you book through us, unlimited mileage and insurance are always included in the price given. 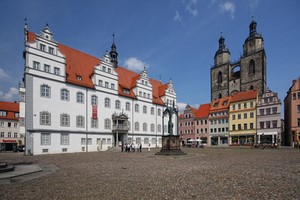 Wittenberg has approx. 50,000 inhabitants (2008) and is located east of Germany on the Elbe – specifically in the state of Saxony-Anhalt.The official name of the town Lutherstadt Wittenberg, for it was here that Martin Luther in 1517 broke up his famous 95 theses against indulgences trade on the church door to Schlosskirche. Along with Luther’s birthplace, Lutherstadt Eisleben, Wittenberg has a place on UNESCO’s World Heritage List.

Wittenberg’s most famous attraction is Schlosskirche. It was erected in 1489 – and has a special position in relation to Martin Luther and the Reformation in the 1500s. Several famous names from the art world is also associated with Wittenberg – including Albrecht Dürer (1471-1528) and Lucha Cranach the (1472-1551). Both have contributed to the decoration of Schlosskirche – and Cranach old workshop and studio – Cranach-Haus – is preserved and is one of the city’s major attractions. Also the monastery where Luther was a monk before he broke with the Catholic Church – Lutherhaus (listed from 1504 to 1507) – is a popular destination.

Of Wittenberg many other historical sites, the following are mentioned: the Old Town Hall (1523), Stadtkirche (1400s) and Melanchtonhaus (1536). A special construction of newer date is Hundertwasser-Schule – completed in 1999 after the world famous “natural” architect Friedensreich Hundertwasser art