Compare prices on car hire in Wolfsburg from all the major brands and find the best deals. When you book through us, unlimited mileage and insurance are always included in the price given. 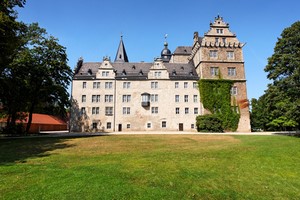 Wolfsburg, with approx. 120,000 inhabitants (2008), is situated east of the northwestern German state of Lower Saxony. Unlike most other cities in Germany is the very “young”.It was in fact founded as late as 1938 – under Adolf Hitler’s Nazi government, as a living area for the employees of the newly established Volkswagen factory. Originally, the city’s name Stadt des KdF-wagens, but it was changed to Wolfsburg in 1946 – one calling for a nearby Renaissance castle.

And just Schloss Wolfsburg, with a history dating back to the beginning of the 1300s, is one of the city’s premier attractions. However, there are also some older architecture that stems from a period several centuries before the city was – among others Burg Neuhaus (from around year 1400) and Schloss Fallersleben (1551).

Otherwise, there is, naturally , modern architecture that characterizes the city. Here, especially Alvar-Aalto-Kulturhaus (1962) mentioned – designed by and named after the world-famous Finnish architect Alvar Aalto. Also Theater Wolfsburg building, erected in 1973, is an example of modernist monumental architecture.

Among the city’s many museums, it is natural to especially mention Die Autostadt, which is both a museum and amusement park related to the Volkswagen Group.

Otherwise, Wolfsburg known as a festival, where some of the most important annual events is the international dance festival Movimentos (April / May), outdoor concerts Jazz ‘n’ More (July / August), Gourmet Party (August / September) and a large market for craft in October.