Compare prices on car hire in Wuppertal from all the major brands and find the best deals. When you book through us, unlimited mileage and insurance are always included in the price given. 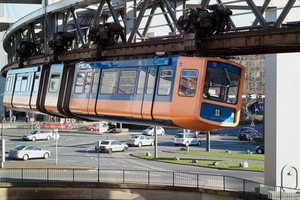 Wuppertal, which has approx. 360,000 inhabitants (2008), is a relatively “new” city in the western German state of Nordhrein-Westphalia.Wuppertal arose when several smaller cities in the south of the Ruhr area – along the river Wupper – were merged.

The city’s most famous landmark is the distinctive cable car – a monorail system, where the carriages hanging in a specially constructed path 12 feet above the river Wupper, which the train follows along a stretch of about 13 km. “Wuppertaler Schwebebahn” was constructed in the late 1890’s, and is – besides being an important means of public transport in the city – also a major attraction.

Otherwise, Stadthalle Wuppertal cited as a major attraction. It is a monumental building in nyklasissistisk style, which was completed in 1900 – and as such contains a concert hall known for its good akkustikk. Among the city’s museums have Wuppertal Uhrenmuseum mentioned separately. There is a special museum for watches / clocks from different historical epochs.

For more family-friendly attractions is the Zoo Wuppertal Zoo is a popular tourist destination, where today there are around 5000 animals. It was established back in 1880.

Nearest international airport is Dusseldorf Airport , which is 27 km west of Wuppertal.