Compare prices on car hire in Würzburg from all the major brands and find the best deals. When you book through us, unlimited mileage and insurance are always included in the price given. 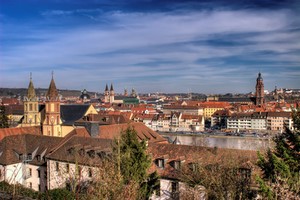 Wurzburg, which has 135,000 inhabitants (2008), is a town on the river Main in Unterfranken region – in the southern German state of Bavaria.It was founded as early as the 700-number – and celebrated its 1300 years anniversary in 2004.

The most famous attraction in Würzburg is 168 meters long baroque Residenz palace, which was completed in 1744 after a construction period of almost 20 years. The castle has been placed on UNESCO’s World Heritage list as a well-preserved and in particular cultural heritage.

Otherwise, most of the ancient city destroyed during a British air attack in 1945, but some of the old architecture has been tried rebuilt after the war. Still, one can then experience Die Alte Mainbrucke from the 1400s, which was the only bridge connection of Main until 1886.

Würzburg is also known as a city where art and culture are strongly emphasized, and each year hosts two major festivals of classical music: Mozart Fest, and Bach-Tage.