Compare prices on car hire in Athens Airport from all the major brands and find the best deals. When you book through us, unlimited mileage and insurance are always included in the price given. 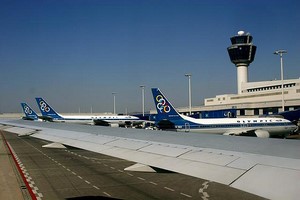 Athens International Airport (Elefthérios Venizélos (ATH)) is located 33 km southeast of Athens and is named after a Greek politician.In 2005, 2006 and 2008, the airport Skytrax’s award for best airport in Southern Europe. The easiest way to get between the airport and Athens is using the subway. Car firms ADA, Avis, Budget, Europcar, Hertz, National / quote and Sixt are all represented at the entrance area of ??the main terminal.

In 2009, 16,225,885 passengers visit the airport which is among the 25 busiest airports in Europe. Athens International Airport is new and was opened in 2001, and replaced when Athens (Ellinikon) International Airport. It consists of two terminals from the main terminal, a trip to any destination within the Schengen area as well as some outside Schengen. From the other terminal, known as Satellite, a journey to destinations outside the Schengen area. It is the headquarters of Olympic Air and Aegean Airlines. The airport serves as a hub for travel between Asia, Europe and the Middle East.

Athens International Airport has a very good selection of restaurants, cafes, bars and shops. It has free internet access, children’s entertainment, business center and ATM, and is known to make use of new technology quickly. The airport also offers a variety of cultural offerings for visitors. The closest hotel is the Sofitel Athens Airport Hotel.