Compare prices on car hire in Mykonos from all the major brands and find the best deals. When you book through us, unlimited mileage and insurance are always included in the price given. 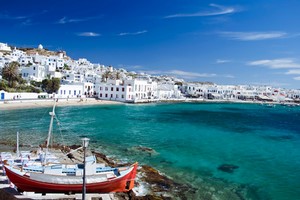 The Greek island of Mykonos is located in the Cyclades islands in the Aegean Sea and belongs to Greece .It has a relatively limited area (86 km2) – and is less affected by high mountains than many other Greek islands (the highest point is at 364 m).

There are approx. 9,000 people in Mykonos – the most in the “capital” of Mykonos Town (Khor). There is also an archaeological museum, where among other things displays archaeological finds from the neighboring islands of Delos and Rheneia. Otherwise, it is first and foremost tourist island is known for. As the holiday spot for celebrities from around the world, Mykonos also a reputation for being a place with a very active and diverse nightlife – and there are also a number of clubs for gays and lesbians here.

Mykonos is sometimes referred to as both “White Island” and the “blue island”. The terms reflects the fact that there are many beautiful, whitewashed house here – with blue doors and shutters.

From Mykonos town there are ferries to such islands of Naxos and Santorini – and to the port of Piraeus in Athens. The island’s airport – Mykonos International Airport – located approx. 4 km from the capital.