Compare prices on car hire in Skiathos from all the major brands and find the best deals. When you book through us, unlimited mileage and insurance are always included in the price given. 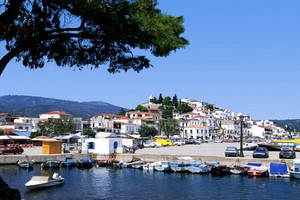 Skiathos (47 km2) is an island in the northern Aegean Sea – in the Northern Sporades, which is located just off the east coast of Greece .There are approx. 6,000 people in Skiathos. “Capital”, which is named the same as the island, which lies on the southeast coast, is the only real town on the island. About 90% of the population lives here. The nearest inhabited island, Skopelos, as seen above in the sky.

Although there is only one city on Skiathos, there are numerous picturesque towns with 50 – 200 people – and not less than 70 beaches.One of the beaches south of the island – Little Banana Beach – is reserved for nudists. Skiathos was designated in 1964 as a special area of ??focus for tourism – and the hotels are currently tight in and around Skiathos Town and the many beaches.

There is a ferry to several cities on the mainland, including to Thessaloniki – and some of the other islands in the Aegean Sea. The island’s airport – Skiathos Island National Airport – Located on the outskirts of Skiathos Town.