Compare prices on car hire in Chalkida from all the major brands and find the best deals. When you book through us, unlimited mileage and insurance are always included in the price given. 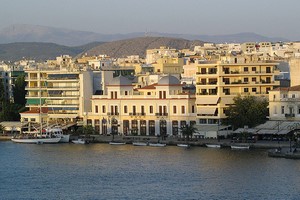 Chalkida (or Chalcis, Chalcis) is the capital of the Greek island of Euboea, which lies in central Greece .The town has 67,100 inhabitants (2002), located on the west side of the island – where Evripossundet is narrowest. The island is connected with the Greek mainland by two bridges. The old bridge (from 1962) is used for tidal observations for visitors.

The city is rich in art, culture and history and has many beautiful beaches. The Greek philosopher Aristotle died in 322 BCKr. in this city – as was his mother’s birthplace.

Some of the most visited tourist attractions in the city are: the church “Agia Paraskevi” – where the oldest parts were built in the 1300s, the Archaeological Museum, the Turkish mosque (with a collection of Byzantine sculptures, mosaics and ceramics), as well as the castle Karababa – located on a hill. From there one has a panoramic view over the city.