Compare prices on car hire in Iraklion from all the major brands and find the best deals. When you book through us, unlimited mileage and insurance are always included in the price given. 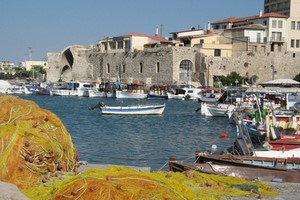 Heraklion (Iraklio, Heraklion, Herakleion) is the capital of the Greek Mediterranean island of Crete. It is fairly middle of the island’s north coast – and has approx. 140,000 inhabitants (275,000 in the metropolitan area), and with it the 4th largest city in Greece.

Iraklion was founded in the year 824 ADKr. of saracenerne, but probably there was a port here since the Bronze Age. Later, the island periodically during the Byzantine, Venetian and Ottoman domination. A brief period around the turn of the century was the capital of Iraklion in a Cretan State, which was then occupied by international forces. Since 1913, Iraklion, as well as the rest of Crete has been a part of Greece.

Iraklion has both a historical, a natural history and an archaeological museum – as well as several special museums. There are also preserved buildings from both the Venetian and the Ottoman era. The historic main attraction is still the excavated ruins of the imposing, almost 4,000 year old Minoan Palace of Knossos – that of the greatest archaeological finds from the Greek Bronze Age.

It is located approx. 4 km south of Iraklion city.

Iraq Lions internasjonele Airport – “Nikos Kazantzakis” (named after the famous poet) – is about. 5 km east of the center