Compare prices on car hire in Kalamata from all the major brands and find the best deals. When you book through us, unlimited mileage and insurance are always included in the price given. 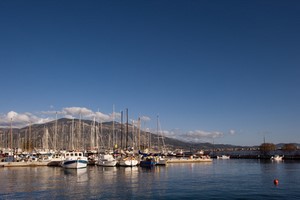 Kalamata (60,000 inhabitants) is the capital of the province of Messinia, which belongs to the administrative district of the Peloponnese. It is located in southwestern Greece – on a large peninsula on the Messinian of the Mediterranean, and is an important port city.From the port there are ferry connections to the Greek tourist islands of Kythira and Crete.

4 km east of town is Mount Taygetos. Kalamata is also known for its many olive trees, and both the olive and olive oil are important exports.

Kalamata has many beautiful beaches, which attract tourists in the summer season. Other sights and tourist attractions in town include: The archaeological museum “Benakeion” – located in old town, several old churches – where Agii Apostili from 1317 is the oldest, a Frankish castle from the 1200s, Folkloremuseeet, railway museum – as well as several modern art galleries.

The nearest airport is Kalamata International Airport, located 7 km northwest of the center