Compare prices on car hire in Karpathos from all the major brands and find the best deals. When you book through us, unlimited mileage and insurance are always included in the price given. 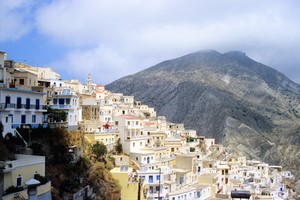 The Greek island of Karpathos is located east of the Aegean, and is the second largest (and southern) island in the Dodecanese. Karpathos is 50 km long and 11 km at its widest, and it lies midway between the tourist islands of Rhodes and Crete . Karpathos has about 6500 inhabitants, but in summer the population may rise to 20,000 because of the many holiday tourists arriving on the island. Karpathos is a quiet island that is well suited for families with children.

The island is known for its dramatic scenery and its many beautiful sandy beaches. The highest peak is Kali Limni situated 1215 meters above sea level

On the island are about 10 villages, where everyone has kept its traditional Greek style. The capital is Pigadia, located on the southeast coast of Karpathos. Pigadia has about 3000 inhabitants, and is a   port city where there are ferry connections to Athens, Crete and Rhodes.The capital has a large influx of tourists during the summer, and the 4 km long sandy beach is the biggest attraction. Pigadia is otherwise a popular open-air theater with cultural events and concerts in the summer.

Other famous tourist cities on the island is a seaside, Amopi and Kira Panagia. The southern part of Karpathos is a popular area for windsurfers.

The nearest airport is Karpathos Airport, located 15 km southwest of the capital Pigadia.