Compare prices on car hire in Kefalonia from all the major brands and find the best deals. When you book through us, unlimited mileage and insurance are always included in the price given. 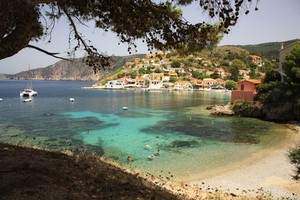 Kefalonia (Kefillinia) is the largest of the Ionian islands, situated in the Ionian Sea, an arm of the Mediterranean Sea between Greece and southern Italy.Kefalonia is also a separate administrative district (prefecture), and the capital – located at the island’s southwest coast – called Argostoli. The entire island has a population of approximately 40,000, of which around 13,000 are living in the capital.

Kefalonian’s second largest city, Lixouri, has approx. 10,000 inhabitants – is situated in the west of the peninsula Pali. Otherwise, there are a number of smaller towns and villages on the island – most of them at sea. The scenery is very beautiful and the beaches are considered among the finest in Greece. Some of them can only be reached by boat. The interior of the island is dominated by a large mountain range, where the highest peak is located at 1628 m.

Among the sights, there are two medieval monasteries – one is located approximately 16 km east of the capital, while the other is in the very south, near the village of Markopoulo. In the north, at Fiscardo, there have been exciting archaeological finds of graves and a theater from Roman times, and in Argostoli is a private archaeological museum.

There are ferries from both Argostoli and Lixouri to several of the other Ionian islands and the Greek mainland. Kefalonia also has its own airport – Kefalonia International Airport – located approx. 10 km south of Argostoli.