Compare prices on car hire in Lesvos from all the major brands and find the best deals. When you book through us, unlimited mileage and insurance are always included in the price given. 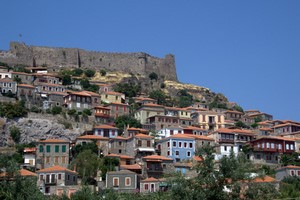 The Greek island of Lesvos (Lesbos) lies to the north of the Aegean, and has approximately 110,000 inhabitants. Lesbos is often referred smaragdine because of its lush green landscape. The highest peaks are Lepetymnos and Olympos – both located 967 meters above sea level

On the island you will find traditional villages for people who want to experience “real” Greece , and along the coast are sandy beaches and picturesque coves.

The capital of Lesvos is located on the southeast coast, and called Mytilene (Mytilini). The town has approx. 35,000 residents with a beautiful harbor, which has ferry connections to other Greek destinations including Athens, Thessaloniki and Rhodes .

Mytilini has many tourist attractions – including an archaeological museum, several impressive churches, “Liberty” in bronze and Mytilini Castle from 1384 – Situated on a hill with great views over the city. The fortress is now used for cultural events.

Other notable cities on the island is Plomari, Molyvos (Mithymna) and Ereso and the resort towns of Agios Isidoros, Anaxos and Petra.