Are you are considering going on a tour and exploring Naxos city, and you worried if there are car hire services for easy movement within the city? Then worry no more because there are a lot of car rental companies that offer a vast range of car rental options that you can select from. Renting a car is straightforward and easy in the city. However, you can go to any car rental website to rent your preferred car. 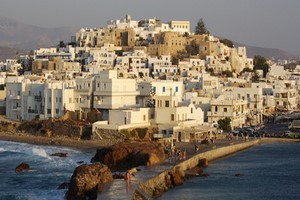 Naxos is a city on the Greek island of the same name located in the Aegean Sea. It is situated on the west side of the Island of Naxos. The city is the largest city and the capital of the Naxos island. It has an area of about 126.957 sq km (49.018 sq mi). Naxos city itself is home to just 2000 residents, but the island, as a whole, is home to approximately 20,000 people. The products produced in the city, which include the kitron liqueur (a liqueur produced from the citron tree), and potatoes, are widely consumed throughout Greece.

Naxos city has a rich historical background. It has a strange mix of traditional and Venetian Cycladic architecture. Naxos city also includes a port, which is often featured in numerous amazing landscapes which many find appealing and is definitely a spot for a quick picture! Furthermore, you will have the opportunity to see incredible monuments such as Portara, The Monastery of St. John Chrysostom and the Cathedral, Archaeological Museum of Naxos, Yria, The Folk Museum Collection, and many others.

The city is one of the most beautiful cities in the Cyclades because it has maintained and preserved its unique traditional, and authentic character. Naxos city has several restaurants, monuments, and museums that you can also check out. However, the island as a whole has a lot of beautiful and attractive places that you can explore during your visit. For instance, the island is also famous for its wonderful beaches, and other ancient places such as Mount Zeus, The Kouros, Apiranthos, and many more.

The weather and climatic condition in Naxos city are favourable, which makes it a good place to spend your next vacation. In Naxos city, the climate is Mediterranean with rainy, mild winters and sunny, warm summers. The average temperature is around 12°C (54.5°F) in January and February, while the average temperature ranges from 24.5°C (70°F) in July and August. The warmest month (with the highest temperature) is July, while the coldest month is January.

There are a countless number of attractive and beautiful places that you can explore when using your rental car. The first place that you should check out is the portal, commonly called Portara by the locals. The place is what was completed of Delian Apollo’s temple. The distance between the airport and the portal (Portara) is approximately 3.9 km (2.4 miles) via Andrea Papandreou, which will take 10 min to get there with your rental car.

The Archaeological Museum is another interesting place that you should visit while visiting the city of Naxos. The museum is situated in the Kastro quarter of Naxos town. The ancient museum is housed in the ancient Venetian Museum, which was formerly a school of commerce. Here, you will find a beautiful collection of artworks and objects. The estimated distance to the location is 4.4 km (2.7 miles) via Andrea Papandreou, which will take approximately 11 min to get there in your rental car.

You can also check out the Routsouna Waterfall to have a beautiful experience of nature. The distance to the waterfall is 20.4 km (12.7 mi) via Epar.Od. Naxou-Monis, and Epar.Od. Naxou-Chalkiou, which will take you about 38 min to get there in your rental car. There are various other places that you can check during your visit to the city of Naxos. Places such as the Bazeos Tower, Agios Mamas, Temple of Dionysus, and many more. Also, you can check out some of the beautiful beaches that the city has.

Another airport close to the city of Naxos is Paros Airport, which is 45 km from Naxos. The airport serves the island of Paros. The airport is located in the southern part of the island, and it is 45 miles away from the city of Naxos. There are lots of car rental companies that you can use to explore that city. Some of these companies include Avis, Budget, Europcar, and so on. Car rental options include Economy, Compact, etc.