Have you ever wanted to explore an island? If you have, then Santorini should be among your top choices. It’s one of the common places that tourists visit because of the amazing landmarks and sights. It is a beautiful island with a rich culture and history. Besides that, you will find the different car hire companies where you can rent a car during your tour. In this article, we’ll shed light on top places to visit on the island. 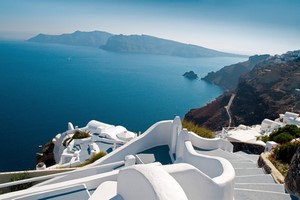 Santorini is an island that is situated in the southern parts of the Aegean Sea, and it is roughly 200km southeast from the Greek mainland. The municipality of the island includes both the inhabited islands of Santorini and Therasia, and the uninhabited islands of Aspronisi, Palaia Kameni, Nea Kameni, and Christiana. Overall, the land area of Santorini is 34.990 sq mi, and it is among the Thira regional unit. Although Santorini has a small population of around 11,000, it records around 500,000 tourist visitations annually. The people of Santorini are called Santorinians.

The Santorinians are good and friendly people. Their official language is Greek, but due to the great influx of tourists to the island, English has become their second language. Santorini is the sight where one of the biggest volcanic eruptions occurred. This eruption is called the Minoan eruption, and happened about 3,500 years ago. The eruption took out the centre of the island, and you can still see several layers of red volcanic rocks in the city. To date, the island is still an active volcanic centre in the entire South Aegean Volcanic Arc.

Economy-wise, Santorini’s primary revenue is through tourism. Apart from tourism, the island generates revenue through agriculture, and it also has a wine industry. With a GDP of around $41.26 billion, Santorini has continued to grow over the last few years. The island got its name in the 13th century, and it’s a reference to Irene, a Christian saint from Aquileia. In terms of culture, Satorinians still observe some of the old traditions. The culture of the people adds glamour to the island itself, making it one of the best places to visit.

The climate in Santorini is classified as a semi-arid climate with characteristics similar to that of the Mediterranean climate. Summers in the city are dry and sometimes accompanied by strong winds. The temperature of the city is usually higher from June to October, and it can sometimes reach 28 degrees Celcius. Rainfall in Santorini follows a Mediterranean climate pattern. The rain is concentrated during the spring and winter, and the island experiences an annual average rainfall of 371mm. During the summer, Santorini enjoys more sunshine, thus making it the common the season with the highest tourist visitation.

While on the island, you can explore the Akrotíri Archaeological Site. It contains remains of clay buildings that once thrived before the volcanic eruption that hit the island. The site has been well-preserved and has remnants of pottery, multi-level buildings and more that gives tourists a hint into how life was for the people before the volcanic incident. Red Beach is another awesome place to check out in Santorini. It has spectacular red-coloured cliff walls that are fun to explore. From the Akrotíri Archaeological Site to the Red Beach is 22 minutes drive with a distance of 7.3 miles (11.7km).

If you love archaeological collections, you can also pay a visit to the Archeological Museum, Fira. This museum is small, but it contains several archaeological findings from ancient Thera during the Hellenistic, Dorian, Byzantine, and Roman periods. You’ll find inscriptions from archaic period, ceramic pottery as well as clay figurines of animals. Profitis Ilias Monastery is a sanctuary built in the 18th-century sanctuary, and it has beautiful iconostasis. The monastery also has a library where you can access historical archives. The distance between the Archeological Museum and the Monastry is 5.8miles (9.3km), and the drive duration is 24 minutes

If you love cliff diving, you can also check out Ammoudi Bay. It is a small fishing village that is situated just below Oia. The village is well-known for its taverns and restaurants where you can get local Santorini delicacies. Additionally, there is an isolated cove in the village, which is ideal for swimming. Besides the Ammoudin Bay, you can pay a visit to the Santo Wines where most of the wine in Santorini are made. Driving from Ammoudi Bay to Santo Wines takes about 31 minutes, and the distance is 12.4 miles (20km).

Whether you are visiting Santorini alone, with your family or on a romantic trip, the Santorini’s Open Air Cinema is one place that you need to check out. Popularly called the Cinekamari, it is an outdoor movie theatre that is situated in the middle of the forest. There are several hotels in Santorini where you can stay during your tour. One such hotel is the Memories Beach Hotel which is located not far from the Monolithos beach. The distance from the Cinekamari to Memories Beach Hotel is 4miles (6.5km), and it takes 8 minutes drive.

There is only one airport in Santorini, and that is the Santorini (Thira) International Airport. The airport serves as both public and military use, and it is located in the north of Kamari village. It is equipped with facilities such as currency exchange, baggage drop-off and ATMs. Athens is the most common destination from the airport while locations such as Madrid, London, Helsinki are seasonal destinations.

While in Santorini, you can hire a car to ease transportation. Among the car rental services that you can use are Budget, Coolcars, VIP Car Rental, Hertz, Santorini Dream Cars, Europcar, and Goldcar. A few of these car rentals have an international presence, and they are a popular choice among tourists. The car hire companies in Santorini have websites where you can book for your car in advance online. This will make it easier for you to get the type of car you want.

Before you select one of the car rental services, we advise you to check their terms and conditions. This will help you know the requirements for renting a car as well as how to can handle any issue that arises. We also recommend that you should inspect the interior and exterior of any car you are renting and inform the rental service if there is a dent or damage.

The roads in Santorini are of good quality and they are properly laid out to reduce traffic congestion. Since it is an island, there are some parts where the roads are narrow and hilly. Nevertheless, the major roads have been fully equipped with street lighting and traffic lighting systems. You can download GPS location apps such as Google Map to navigate your way around while driving.

The speed limit in Santorini varies based on the type of road you are plying. On open roads such as the major 2-lane roads, the permitted speed limit is 40 mph (65 km/h). However, on most narrow roads, you are expected to drive slower depending on the condition of the road. You should also note that driving by the beach is against the law in Santorini.

There are several free car parks in the Santorini. However, if you park in the wrong spot you may receive a parking ticket. You can identify many of these parks on your location app or by their signposts. If you find yourself in an area where there is no car park, you can ask the locals where street parking is allowed. Traffic in Santorini is mild especially during working hours. However, the rush hours are usually early in the morning (8 am to 10 am) and evenings (6 pm to 7.30 pm).