Compare prices on car hire in Skopelos from all the major brands and find the best deals. When you book through us, unlimited mileage and insurance are always included in the price given. 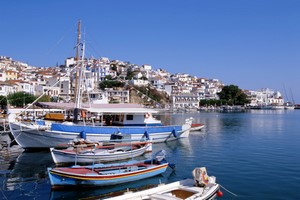 Skopelos is located in Northern Sporades, just off the east coast of Greece .The nearest inhabited island is the tourist paradise of Skiathos. Although Skopelos is twice as large in area as Skiathos, it has a lower population: approx. 4700. About half   live in the “capital” of Skopelos town, which lies southeast of the island.Otherwise, Glossa in the north and Neo climate in the west the largest agglomerations.

Life on Skopelos is less hectic than in many other typical tourist islands in the Aegean Sea. This is also a place for those who like to explore nature. The interior of the island is dominated by mountains and the mountains are the canyons, valleys, and trickling streams. It is not for nothing that Skopelos is known as “The greenest island in the Aegean”.

Of course there are also beaches here – both small and large. Not everyone is so well developed facilities, but several places on the island is the boat, so the possibilities to find “their” beach, is thus present.

The old town of Skopelos town has a fascinating and well preserved “traditional” Greek architecture, and the streets are so narrow that it is virtually impossible to reach by car. Thus, perceived neighborhood as peaceful, although there is usually a lot of people here.

Skopelos has no airport of its own, but is served by the Skiathos Island National Airport on the neighboring island. Dit is both hydrofoil and ferry (the experience Jan 1 to 1 / 2 hours).