Compare prices on car hire in Thassos from all the major brands and find the best deals. When you book through us, unlimited mileage and insurance are always included in the price given. 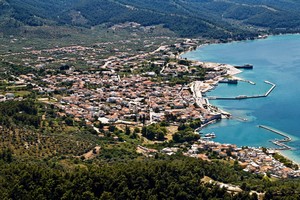 The Greek island of Thassos is located far north of the Aegean Sea – near the coast of the Greek mainland.The island has about 16,000 inhabitants, where most live in the main city – Thassos Town.

Thassos is a mountainous island, where the highest point is Ypsario – which is 1045 m. Otherwise, the island is green and lush with beautiful scenery and welcoming beaches. Thassos has the mining industry with the production of marble, or the main activity is agriculture and tourism.

From Thassos there is a ferry to / from the ports of Kavala and Keramoti on the mainland.

Thassos Town, located on the north side of the island, often called Limenas – meaning port. Here are hotels, shops, restaurants and bars – as well as several beaches. You become tired of sun and beach you can visit the archaeological museum with finds from the 600s BCNOK Thassos town also has an outdoor amphitheater – originally from the 5th century. Today, this restored and used for open air concerts in summer.

Other famous places on the island are: Panagia, Potamia, Limenaria, Theologos, Prinos and Potos.

The nearest airport is Kavala – Megas Alexandros Airport – located just outside the city of Kavala on the mainland.

Fastest way to travel to the airport is by boat to Keramoti (40 min. From Thassos Town).From there it is 15 min. in driving to the airport.